Posted by Ce Eshelman on
·  4 Comments

I know the word discipline derives from the Greek word to follow or follower of a teacher (like Jesus). In the truest sense of the word, it follows that children are the disciples of parents (who often are not at all like Jesus); however, it does not follow that discipline means “to teach,” but rather it means “to learn.”  To teach is a misnomer.

In popular culture, discipline has come to mean something more authoritarian, power over, and punitive.  To discipline a child is to create learning through some form of pain–isolation from the family, restriction from play, loss of beloved things, slaps, spanks, verbal lashing, humiliation, and other unspeakable forms of torture in the name of discipline.  Pain of some kind is de rigueur,  as though pain infliction is the only way to get a child to learn.  Isn’t that odd?  Even a little counterintuitive from where I stand.

I wonder if I would have learned Spanish if every time I conjugated a verb incorrectly the teacher inflicted pain so I would learn.  I am actually having a hard time even imagining that scenario.  Of course, we all know pain is not necessary to learn Spanish or any other academic subject.  I think we all know that, except a lot of knock-down drag-out fights over homework might be evidence to the contrary.

Actually, to really learn Spanish (for native English speakers) there needs to be 1) a desire on the disciple’s part to learn, and 2) there may or may not be another reward involved, such as a passing grade, the ability to speak with someone in Spanish, the internal feeling of pride and accomplishment, or college entrance and employment advances.  Come to think of it: I’m pretty sure had pain been part of the equation, I would have elected not to learn Spanish.  I would have given up on my desire to learn it, and any of the possible rewards that would have accompanied acquiring Spanish speaking skills.  I never would have made it to college, because a language is required.  I would not have become a teacher or therapist.  Likely, I would not be able to afford the luxuries my professional career brings me.  I might have ended up living below the poverty line:  Perhaps even lose my will to accomplish anything in life at all.  I might have started hating Spanish, and learning, and teachers all together. I might have dropped out of school, given up on myself and my goals, and perhaps pursued a less than savory lifestyle to get by.

If I had to choose between painful success and painless survival, I’m not sure I would have had enough pre-frontal cortex developed in my high school years to make a decision that ultimately would have given me life advantages.  To clarify, the decision that would have given me life advantages would have been to continue on learning Spanish, while hating learning, hating teachers, and despite the pain inflicted when I made mistakes–despite the pain, not because of the pain.  (I thought about inserting an old Nun quip here, but I’m too serious about the topic to make it funny.)

What do you say we collectively stop painfully disciplining our children to teach them to learn and start supporting them, growing them, shaping them to learn instead?  Just a thought on this fabulous Friday.  Go have some fun with your precious traumatized, attachment challenged babies.  Playful engagement is the best teacher of children and it is  in their native language.

The next 8-hr. Trust-based Parent Training is scheduled in June 18th and 25th from 12 noon to 4 pm.  $200 per two person couple.  Childcare available for $30 each day, second child $10 additional. To sign up, email ce@attachplace.com and I will register you.

TIME CHANGE: Monthly Adoptive Parent Support Group is every second Wednesday of the month from 6pm to 8pm.  Group and childcare are free. 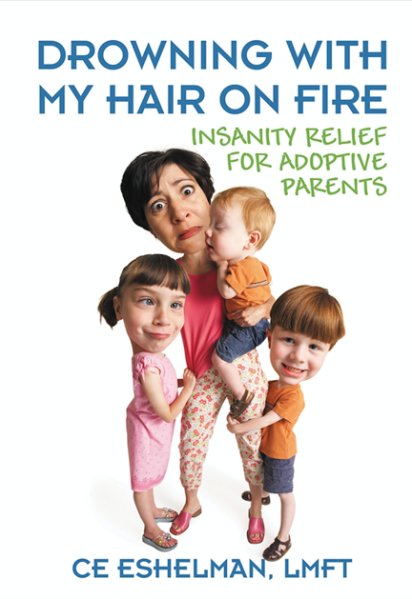 To buy your very own copy of Drowning With My Hair On Fire: Insanity Relief For Adoptive Parents by Ce Eshelman, LMFT, go toAmazon.com or www.attachplace.com/drowing-hair-fire.  Please be so kind as to leave a review on Amazon.  Thank you.

This is a demo store for testing purposes — no orders shall be fulfilled. Dismiss