I wrote some of the following blog post in August 2014 about my son (17 yrs) who was struggling with lying and stealing to manage his screen addiction.  The last part of this post is what is happening now, three years later. He is 20-years-old, living in a semi-supportive care home.

My daughter did these kinds of shenanigans a lot when she lived at home.  I thought my son was going to escape the magnitude of her impulsive urges, but I was wrong.

This, by the way, is not his first rodeo.  He actually “steals” all the time: all the honey in every jar; all the sodas hidden (and somewhat forgotten) in the back of my closet; sneaky charges to my debit card via “Mom, can I borrow your phone for a minute”; and every cookie ever brought into the house. This time what he did was a crime.  I told him that a second crime like this will be reported to police. He might have to go to Juvenile Hall. And I left it at that.

A week or so later he came to me and said, I know I did something really wrong. I don’t know why I did it.  I know you hate lying and stealing. I am really sorry. I will accept whatever consequence you want to give me.  Actually, Mom, I think you should take my computer away for a while.  I did just that for 6 months.

When he and his sister were younger, I disliked when they leveled their own “consequences” for their wrongs before I had a chance.  The drive for control in these kids flipped me out and I knew it wasn’t in either of their best interest. I wanted to be the parent. Now, I appreciate them both taking responsibility.

I had mentioned previously to my son that I thought his computer use was becoming a problem because his desire to play “no matter what” caused him to make poor decisions, like stealing my credit card. He took that to heart. With courage and genuine sadness, he presented me with his most prized possession, his laptop.

This same boy is now a man.  He lives away from home, though I am still footing the bills. I will forever be doing that until one day he spontaneously recovers or SSI agrees he is unable to care for himself.  I am torn about this because it would be amazing for him to “not qualify for SSI” because of his productive behavior, rather than because he is so damaged by childhood trauma that he cannot function well enough in society to interview for the most menial of jobs.

My son has not attended school (extended high school at a special school for children who need special attention until they turn 22 years old) for two months.  Turns out he has been spending every night talking with an internet only girlfriend–possibly a 50-year-old “catfishing” man, for all I know. My son sleeps through his van ride to school every day and is completely unmotivated to do anything differently.

Two weeks ago, I gently took his laptop from under his arms as he lay dosing in bed at noon on a school day.  I told him I loved him and he needed to shower, wash his clothes, and go to school.  The next week he didn’t go to school either.  I returned, then, for his secret desktop.  He said nothing.  Afterward, I learned he started using the house computer all night, and I wrote an email requesting parental controls be added to that one to support his school attendance.

Today, he went to school. Hallelujah. Do you hear the choir?

This is so hard. I love him, and he is addicted to computer socializing because face-to-face socializing has always been tough for him.  Still, he needs to grow new neuropathways for living a non-virtual life. He needs this so he can learn to support himself when I am gone.

While I can, I am going to continue parenting him like he is half his age.  He is half his age and he needs a mother.  You might be wondering why I don’t let him live at home then.  I’ll be honest.  I just cannot live with him any longer.  My own health is at risk and I need to mother him in a different way to continue to do this part of my commitment to being his mother for the long haul. It is what it is.

Sometimes I feel selfish, unloving, rejecting, and unmotherly.  And sometimes, I am able to see the limits of my own humanness.  My love is boundless, so I continue to love my children in every way that I can without sacrificing my life.  I have come to the realization that sacrificing myself will not make my son (or my daughter) more successful.  Little by little–painful, laborious and heart-wrenching lesson at a time–I can continue to thrive and live another day to support my children to grow and create the lives they are capable of.

The last line of my original post read, Little by little, I see my son becoming a man.  That line still applies.

NEW!  AUTISM SPECTRUM DISORDER (ASD) CO-ED SOCIAL GROUP for Tweens (older 11-years-old through younger 16-years-old) at The Attach Place. Stay tuned for details coming soon. This will be a no-cost social group for the children, and parents will have an opportunity to socialize, chill, or maybe read a book in a separate space, too. 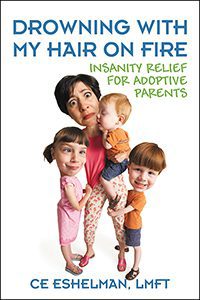 UPCOMING ADOPTION SUPPORT GROUP facilitated by Ce Eshelman, LMFT:  Join our monthly Adoptive/Foster Parent Support Group on November 8th, 2017! Open to all parents/caregivers at no cost. Support Group is every 2nd Wednesday of every month from 6 pm to 8 pm at 3336 Bradshaw Road, Ste 175, Sacramento, CA 95827.

TRY MY BOOK FOR DAILY SUPPORT: Drowning With My Hair On Fire: Insanity Relief For Adoptive Parents by Ce Eshelman, LMFT.  Daily inspirational reading for those who sometimes find it hard to keep hope alive. There is hope for healing.